A tours of Kathmandu Valley

Whether running away from a relationship or celebrating one, whether ready to foot all the bills or just getting along, whether the monotony of the routine forces escaping for a while or times simply look good for a break, Kathmandu Valley presents a tour of must go to places in three of its cities : Kathmandu, Bhaktapur, and Patan. All these cities of temples and palaces seem to satisfy this urge in many seeking an experience into the self. Presenting those with this intent with opportunities for a peek inside, this surface tour (not an in-depth one) takes all interested in six sites of significance. 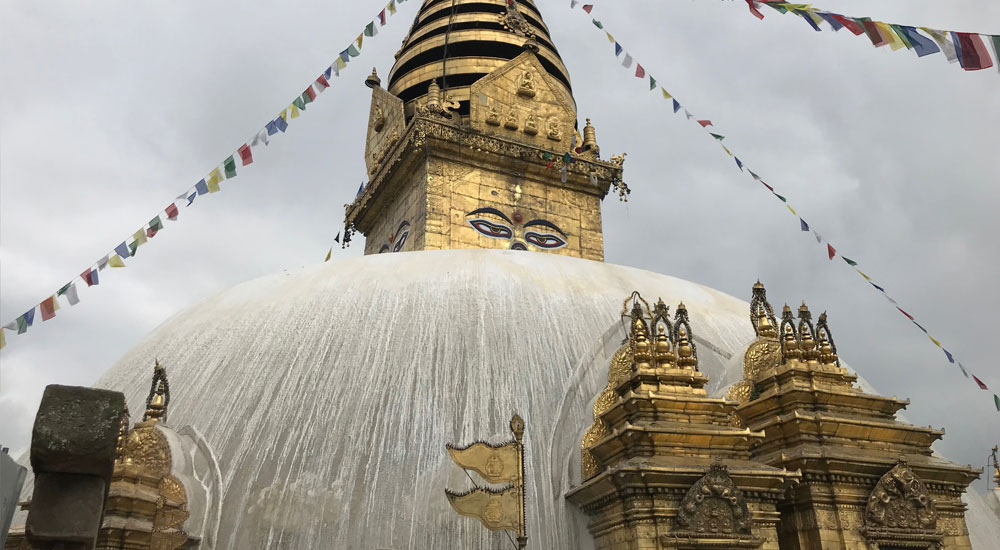 A TOUR OF SWYAMBHUNATH (The Monkey Temple)

There’s certainly something about those eyes, atop a dome whitewashed for a reason that we will need to personally investigate.  For the believers of records, the shrine is around 1,600 years old. For the believers of faith, the shrine is a manifestation on its own from that unrecorded past. For both, however, it is the Swoyambhunath now, situated atop a hill making room for the view of the Kathmandu City.

In the periphery, there are numerous other temples and votive structures. Anyone of them is worth investigating into for an insightful apprehension. The Harati Devi Temple and the statues of goddess Tara or the Shantipur, Pratappur, Anantapur, Agnipur, and Nagpur or the seventh century Dipankar, or the Vajra, the thunderbolt scepter, all remain open welcoming everyone keen to know or otherwise.

The fluttering flags come with mantras in those five different colours in order from left to right, blue, white, green, red and yellow and represent the five elements as well as the five pure lights, whether it’s the Lung ta, the horizontal smaller versions hanging on long strings or the Darchog, the vertical larger ones making their presence on the poles. These mantras, from ancient times, are meaningful for those of us who choose to believe in with the strength that does not easily bend and also for those of us who seem to doubt everything that comes our way.

Sacred to all, Swayambhunath, can be reached from two different directions. The one more preferred goes up a steep staircase with 365 steps from the east. The shrine is also called ‘The Monkey Temple’ since the small remaining patch of forest the steps pass through has always remained a home to hundreds of monkeys.

A TOUR OF BOUDHANATH

Take the time to listen to the auspicious 108 statues of Dhyani Buddha around, to feel the spinning faith in the Prayer Wheels around the sixteen-sided asymmetrical wall, and to find the way to Nirvana in the thirteen levels of Spire. Enquire whether the shrine houses the relics of Kasyapa or some remains of Buddha. Feel the earth in the Plinth, the water in the Dome, the fire in the Tower, the air in the Spire, and the void in the Umbrella atop.

Resting some six kilometers from the city centre for centuries now, Boudhanath – the revered Mandala, the largest Chorten, the magnificent Dome – observes the activities around, in the courtyard and upper levels of the Plinth, of the performing monks and the trusting devotees, as well as the inquisitive travelers and the confused souls. Those eyes, atop the Dome on all four sides, would certainly agree and the entrance to the upper levels of the Plinth in the North end, next to the temple of the ‘goddess of smallpox’, Harati (Ajima), would also not differ.

Nearby, the Kapan Monastery also encourages quite a few practices. With the addition of the monastery for the Anis as well, students, in the Gompa, join the Lamas for insights into Tibetan Buddhism through sessions of meditations and teachings and discussions, importantly, remaining on vegetarian diets.

A TOUR OF PASHUPATINATH

The head of the twelve Jyotirlingams revered in different parts of India, Pashupatinath watches from inside a majestic Pagoda, with a double-layered golden roof and a single-tier plinth. The silver doors, on all four sides, open for worshippers while only the one on the west offers a closer Darshan. At the center of the temple with a golden Gajur on the top, the faces of the main Lingam portray the various nature of Shiva: Barun, Ardha Nareswor, Tatpurasha, Aghor, and Ishana.

On the banks of the Bagmati River some five kilometers north-east from the city center, the main courtyard of the Pashupatinath Temple houses many other shrines of faith as well as some votive offerings. A shrine with 184 Shiva Lingams and Kirtimukh Bhairav, Unmatta, Surya Narayan, and Vasukinath Temples are in the inside, along with the statue of Nandi, Hanuman and reclining Bishu.

On the outside, the Pashupati Area includes the Gooheyshwori Temple, Ram Mandir, Virat Swaroop, and Pandra Shivalayas. The Arya Ghat close by is for cremations that follow the Hindu rituals.

The Aratis in the evenings not only alight the entire courtyard but also fill the atmosphere with mantras and prayers. 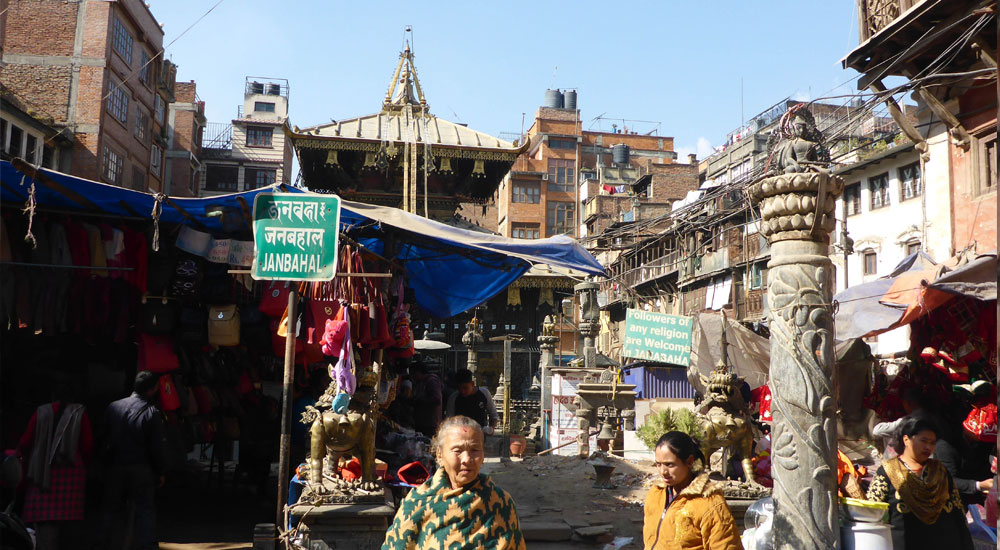 A TOUR OF KATHMANDU DURBAR SQUARE

The Mallas first, then the Shahs once ruled the Kingdom of Kathmandu from the royal palaces of Kathmandu Durbar Square. That was until 1896. The Shahs then moved to Narayanhiti Palace, but the Durbar Square still held important royal ceremonies.

As the kings went about adding architectures to the square, the people too noticed the influence right from the erection of the Kasthamandap. The place and its surrounding gradually became a place for business, trade, and worship, and still, continue to do so.

Today, the Kathmandu Durbar Square, also known as the Basantapur Durbar Square, is a UNESCO Heritage. Unfortunately, the site saw some of its structures of significance crumble when the almost 8 Richter earthquake hit the region in April 2015. Reconstruction is going on. Nonetheless, the remaining artistic and historical works of value can still tickle an inquiry in some and force an investigation in others.

The three loosely linked courts come with palaces, temples, courts, and idols. With the Pagoda architecture dominating the structures, carved to excellence are the windows and doors. Stone statues of protectors and guardians are equally impressive. The heritage site includes the temples of Jagannath, Kotilingeswara Mahadev, Mahendreswara, Taleju, and Degutale, as well as the images of Kal Vairav and Narashimha of the Malla times, and the Nautale (Basantapur) Durbar and the Sweet Bhairav from the Shah period.

For many, the belief of the local communities in the Living Goddess Kumari should be of interest. 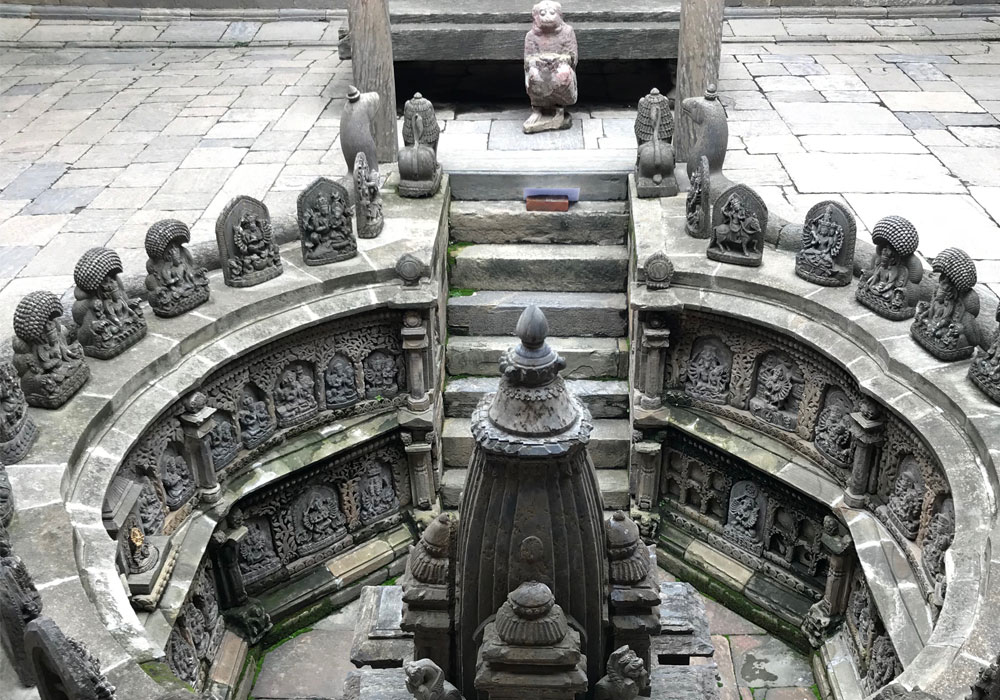 A TOUR OF PATAN DURBAR SQUARE

Despite the loss from the earthquake that hit a high of almost 8 on the Richter scale in April 2015, Patan Durbar Square still holds on. Stone lions still guard the gates of Patan Durbar; the architecture, along with other works of art, whether inside the Durbar, now a museum, or outside in the courtyards still remain evidence of the time when the Malla Kings reined the place hundreds of years ago right from Patan Durbar Square; and the locals still go about their daily lives in the 136 bahals (courtyards) from those times.

“Today is ‘Krishnaastami’ Since early morning, people have gathered in long queues to pay their respect to their Krishna.” Krishna Mandir is one of the important structures of faith in Patan Durbar Square, just opposite the western face of the Palace. To the right and left of the temple, there are the other temples of significance to the locals as well as the visitors. They include the Bhimsen Temple, dedicated to Bhimsen the god of trade and commerce for the local Newars; the Taleju Temple, dedicated to the deity of the royals; and the Viswanath Temple, dedicated to Shiva.

A tour of Patan Durbar Square seems incomplete with a feel of its largely traditional surroundings. 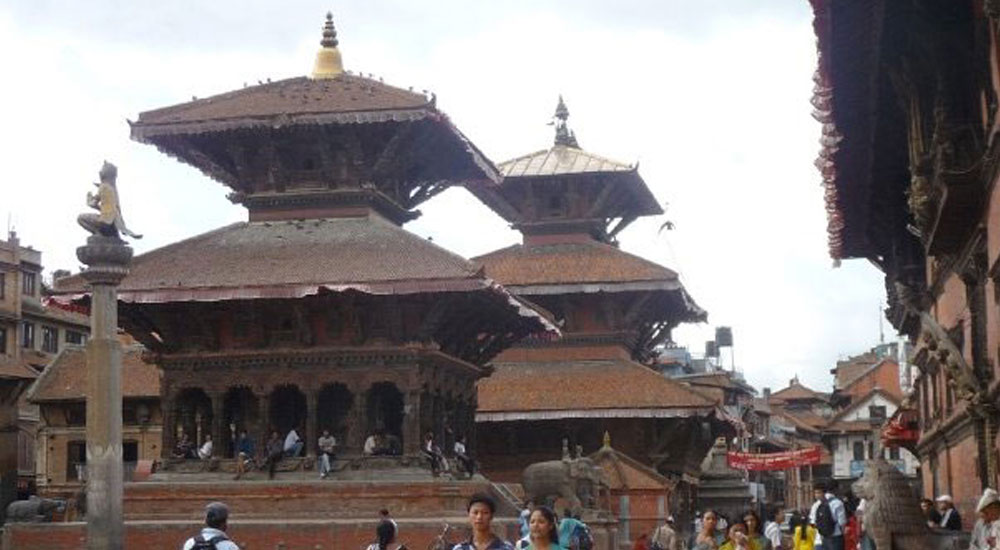 A TOUR OF BHAKTAPUR DURBAR SQUARE

The Malla Kings once ruled the entire Kathmandu Valley from Bhadgoan’s Tachupal (now Taumadhi) Tole. Passionate about art and culture, the Kings then didn’t only build a palace for themselves but a work of art known today as Bhaktapur Durbar Square, which has made its claim as a UNESCO Heritage Site.

In the Durbar Square, the Pachpanna Jhyalé Durbar (meaning a palace of fifty-five windows) still reminds of the peeks through those tiny holes of prince and princesses. The Silver Bell, next to the Vatsala Temple that succumbed to the 2015 earthquake, still makes dogs howl once the colossal bell rings. King Bhupatindra Malla, in the form of a stone statue atop a matching column, still continues worshipping to, perhaps, show respect. The Temple of Nyatapola still makes heads turn upward from the courtyard below for a bottom-up view of the five-story magnificence of an art. Lu Dhowka (The Golden Gate) still arguably claims to be the most attractive specimen of the kind. And the Lion’s Gate, with all its beauty, still remains evidence of the craftsmen who had to lose their hands for creating the masterpiece.

Although not within the confinements of Bhaktapur Durbar Square (Durbar Square proper, Taumadhi Square, Dattatreya Square and Pottery Square), the works of art, in the form of statues and temples, have also woven their ways into the local Newari communities near and far in this city of Bhaktapur.