The Annapurna Circuit Trek is one of the most treasured and pre-eminent ones in almost every trekker’s bucket list. The Annapurna Circuit Trek Route encircles the Annapurna Massif in North-Central Nepal varying between 160 km - 230 km in length. By the end of the trek, you will cross two different river valleys i.e Mashyandgi and Kali Gandaki river valley. The trek route comprises of a wide variety of climate zones from sub-tropical Besisahar(760m) to the highest point at Thorung La pass (5416m). Furthermore, the scenic landscapes and cultural diversity of the region makes it one of the very best long-distance trek in the world.

This article is a guide-through to the acclimatization process and safety measures to be taken while trekking in high (1500-3000m) to very high altitude(3500m to 5500m) zones. You will be trekking into the high-altitude zone with reduced air pressure and diminished inspiratory amount of oxygen pressure. Due to this, avoiding Annapurna circuit trek altitude sickness and staying healthy throughout the entire Annapurna Circuit Trek should be your biggest safety concern. 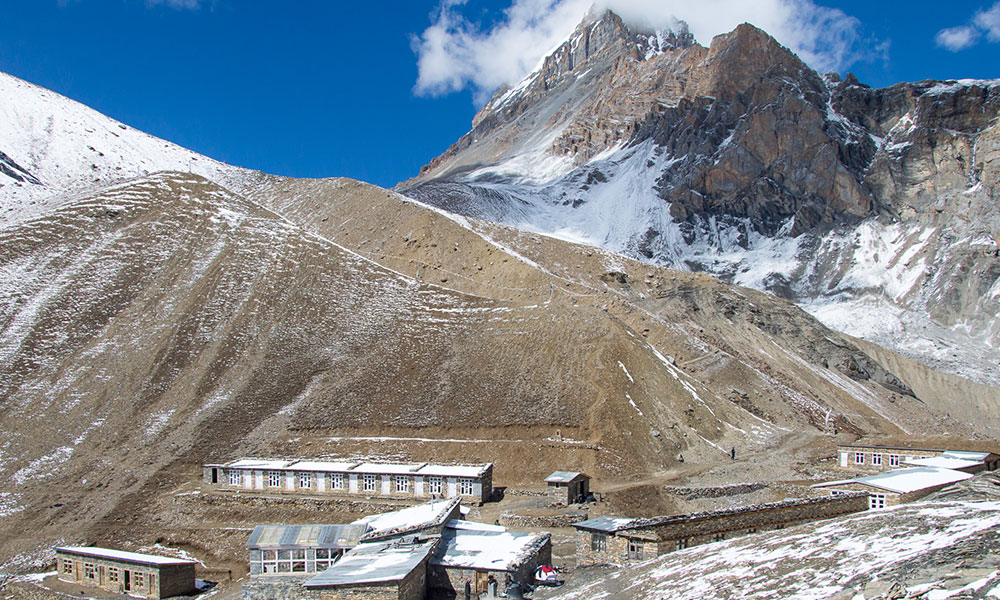 Acclimatization is the process of gradually becoming adapted to the new climate or to the new conditions of the surrounding environment. Altitude acclimatization is necessary for almost all people moving rapidly from lower to higher altitudes. It helps your body adapt to the decrease in oxygen molecules at a specific altitude. During acclimatization over a few days to weeks, the body produces more amount of red blood cells to withstand the lower oxygen saturation in blood in high altitudes. It is the best way to prevent Annapurna circuit trek altitude sickness by climbing to a higher point on the trail at a slow pace.

The acclimatization process is very important and it cannot be rushed or skipped. This can be frustrating to the fast-trekkers or trekkers who are short on time. It can be achieved by spending remarkable time at higher elevations and descending to the lower elevations for resting/sleeping on the same day. Below are the best possible ways to prevent yourself from getting Annapurna circuit trek altitude sickness and boost the acclimatization process on the trek.

Trekkers who are moving consistently to a higher altitude naturally acclimatize to the new environment within two or three days of rest. Within this duration, the body regenerates and develops an increased number of red blood cells to increase the oxygen-carrying capacity of the blood, in order to recompensate for lower levels of intake of oxygen. In case of serious symptoms of high-altitude sickness, one must prioritize in descending to the altitude line where the body is absolutely hazard-free. As mentioned earlier, appropriate rest, fluids and intake of vital nutrients help the body acclimatize on its own.

We have Annapurna Circuit Trek package which will cost you less. For price contact us.

Altitude Sickness is the condition or negative health effect on the body that may occur anywhere at an altitude higher than 8000 feet or 2500m. It may be caused due to the strenuous activities done at higher altitudes where atmospheric pressure and amounts of oxygen is low. It affects many trekkers and mountaineers traveling at higher altitudes. While doing Annapurna Circuit Trek, you will have to walk for a remarkable number of days in the high altitudes. So, there are chances of you being affected by altitude sickness. One having sound health or decent physical fitness also have the similar risk of Annapurna circuit trek altitude sickness. It may affect anyone ascending to the high-altitude (2500m or above) and it is very unpredictable too.

Thorung La Pass is a mountain pass with an elevation of 5416m. This is the highest point achieved during the Annapurna Circuit Trek. Oxygen level and atmospheric at this point can reduce by 50% than sea level. Due to this, trekkers doing Annapurna Circuit Trek have the risk of getting Altitude Sickness. It is very important to have a general idea about altitude sickness, its symptoms and preventive measures. This can help one can decide to descend immediately, take appropriate steps, or even get evacuated in case of need. 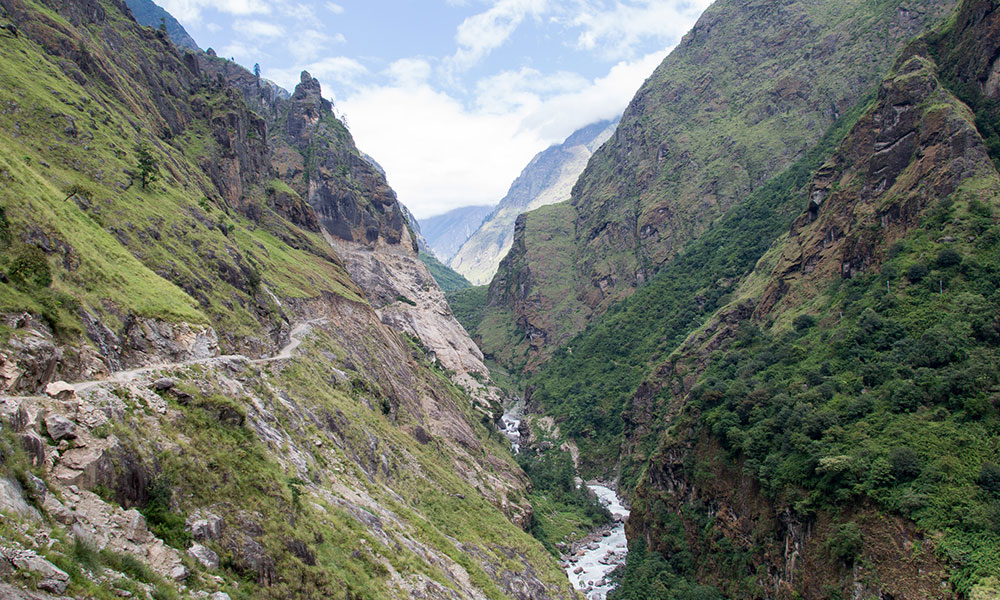 The probability of getting Annapurna circuit trek altitude sickness depends upon the body’s ability to adapt to increasing altitude and reduced amount of oxygen. Essentially, there are three main types of altitude sickness:

Acute Mountain Sickness (AMS) is the modest type of altitude sickness. It is the most common among the altitude sickness while traveling from the lower elevation to higher altitudes. Symptoms of AMS usually can be seen within 12 to 24 hours of reaching a higher elevation. As the body acclimatizes, it gets better within a day or two with adequate rest, intake of vital nutrients, rehydration of body and proper medication if necessary.

Headaches and difficulty in breathing are the main symptoms indicating altitude sickness. Dehydration may also be the cause of severe headaches at higher altitudes. Symptoms correlated with Acute Mountain Sickness include:

In the case of identification of two or more above listed symptoms while traveling at higher altitudes, the first very step required to take is descending at lower altitude lines and resting. It gets better on its own after two or three days of adequate rest.

High Altitude Pulmonary Edema is an advanced form of altitude sickness. It is a condition caused by excess fluid in the lungs which collect in the numerous air sacs in the lungs, causing difficulty in breathing. It is a life-threatening form of non-cardiogenic pulmonary edema that occurs in lowlanders who ascend rapidly to higher altitudes typically above 2500m (8200 ft). Trekkers and high altitude travelers run the risk of developing high-altitude pulmonary edema (HAPE). The rate of ascent, the altitude attained, the amount of physical activity at high altitude ignoring mild symptoms of AMS may come up with this sort of altitude sickness.

Your general health condition might worsen or symptoms may get extreme in case of moderate altitude sickness. If you are troubled by the symptoms, you must descend to the lower elevation (not more than 4000 feet) immediately and take proper rest. HAPE can be life-threatening if left untreated and if appropriate steps are not taken immediately. To figure out, if you have a more moderate case of Acute Mountain Sickness (HAPE), the following symptoms should not be ignored to avoid any risk:

Oxygen is usually the first treatment and can often relieve your symptoms. HAPE usually resolves on its own after descending, and two or three days of rest at a lower elevation may get you back to your sound health. After the symptoms have fully been resolved, ascent can be resumed gradually. 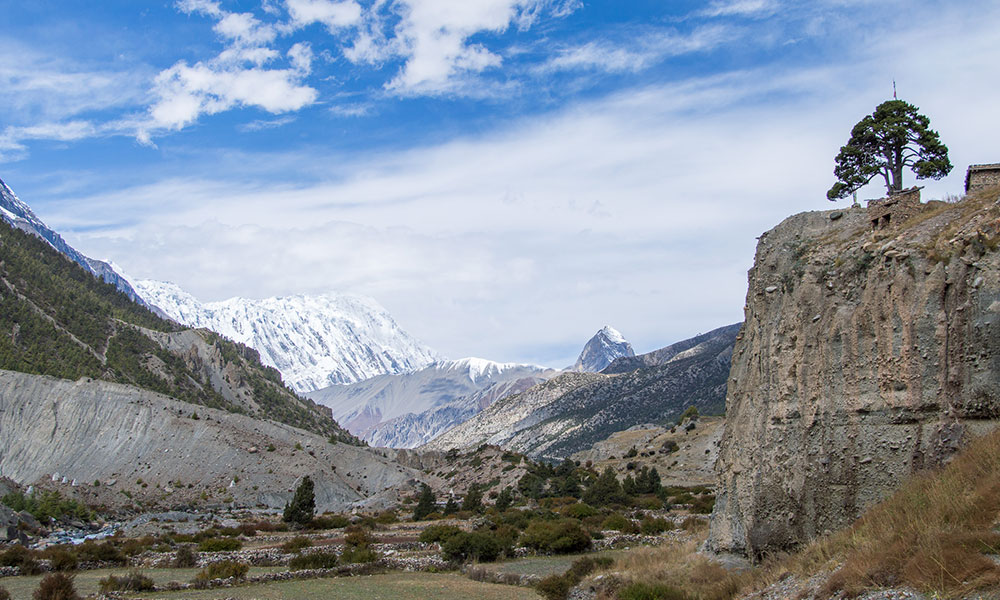 High Altitude Cerebral Edema (HACE) is the most intense yet rare form of altitude sickness. It generally occurs in high altitude travelers at much higher altitudes (6000m or above). It can be caused by the physiological effect of traveling to high altitude causing leaky capillaries in the brain resulting in fluid accumulation and brain swelling. If the body is suddenly exposed to the environment with low level of oxygen and atmospheric pressure, there are chances of developing HACE. Although it is less likely to get diagnosed with HACE during Annapurna Circuit Trek, it is better to have a general idea about the condition. HACE can be developed if primary symptoms of AMS and HAPE are ignored/left untreated and ascend to higher altitudes is continued. Initial symptoms of HACE include:

Descent without delaying is the most effective treatment of HACE. If available, supplementary oxygen or drug dexamethasone should be given to treat HACE. If victim doesn’t descend or medications are not provided immediately, HACE can be life-threatening and may lead to coma or death.

Moreover, trekkers should be aware of the chances of getting altitude sickness while doing Annapurna Circuit Trek or any other Alpine Climb. With proper measures and guidelines, annapurna circuit trek altitude sickness can be prevented or cured. Some of the preventive measures to avoid risk of altitude sickness are listed below:

Always keep in mind about the preventive measures for Altitude sickness and follow these above-mentioned guidelines. You can complete this fairly moderate Annapurna Circuit Trek with no problem at all. The vital rule is to allow sufficient time for acclimatization and customize your trek itinerary for rest days. If you identify any symptoms of Acute Mountain Sickness, do not ascend to higher altitudes. Violating this simple rule may result in health hazard, coma or even death. Stay in the same altitude or descend lower in case of AMS till your symptoms are completely gone away. You are ready to ascend again as soon as you get better.

Trekking is a great way to challenge yourself and push yourself beyond limits. Annapurna Circuit Trek has got all to offer an adventurous and life-time memorable trip. Trekking on this kind of remote trails into the nature is a great way to improve your physical and mental health. It can be quite an adventurous, exciting and thrilling experience, if proper precautions are taken and one is well prepared for the upcoming challenges.

You can also book the complete package for the trek. The itinerary can be customized according to your choices and the appropriate timings. For further details, you can email us at [email protected]