Two Trailblazing Base Camps: Going above the timberline or a hike down country roads, take me home?

Nepal’s geographical assets can be a virtual enigma for visitors in search of discovering the unknown from the known for exceptional holidays of a lifetime, all in the spirit of adventure!…& when you’ve decided that Nepal is where you want to head down to, making a choice can be as confusing as it gets. Natural beauty is everywhere & if treks are a part of your DNA, then Everest Base Camp [EBC] & the Annapurna Base Camp Trekking tops the popular charts of the hottest destination on planet earth for trailblazing adventure…It’s in making the best choice every adventure lover of Nepal faces finally: Annapurna Base Camp or Everest Base Camp? Most nature loving backpackers end up at some point making a choice in the end, because Nepal is one country where one is never enough…at some point in your lifetime, you will make a beeline to Nepal again…& again!!!

When making your choice, it’s important that you understand the physical differences between these two swashbuckling trails that have captured the hearts of millions ever since Nepal opened its doors to outsiders in the ‘50s. There are no actual stats to determine which base camp has an edge over the other; some hikers would simply love the Everest Base Camp  & the Annapurna Base Camp would surely have its lovers, too. 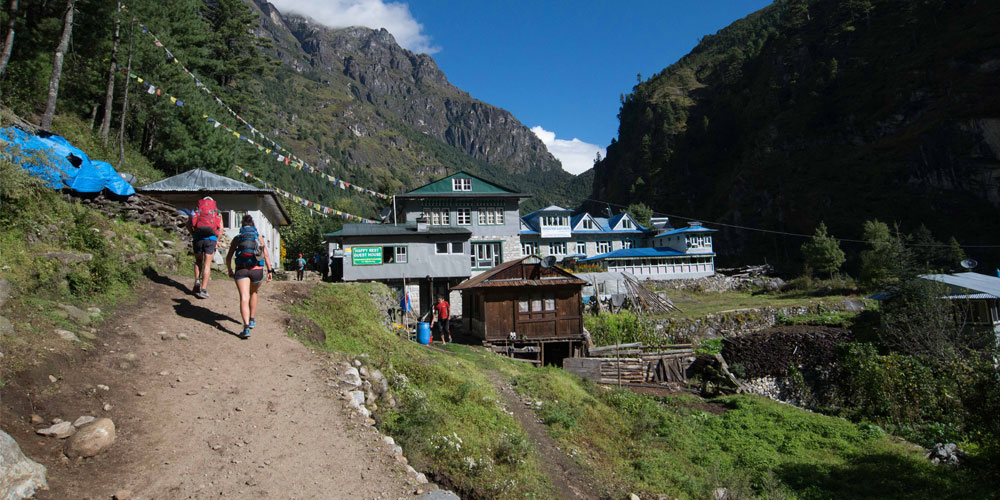 Doing Everest Base Camp will, in the course of your arduous journey, certainly take you above the timberline after you’ve crossed EBC on your way to the towering Kalapathar for brainstorming views. Trekkers usually opt for the Everest trail to get to the fluttering prayer flags of Basecamp dancing in the wind; this is where many expeditions haul up before the big push in May. The EBC route is an epic ‘Himalayan’ trail in Nepal trodden by legendary climbers & this primarily attracts trekkers who want to enjoy the emotional experience based on the knowledge that this is the path the famous Edmund Hillary & Tenzing Sherpa walked when they first conquered Everest. The altitudes go high (you go 3420 meters at Namche Bazaar on Day 2 of your trip), and the imposing silver grey peaks seem to follow you almost everywhere. The emerald Gokyo Lakes and the formidable lesser trekked 3 high passes of Cho La, Kongma La & Renjo La make grand detours from the much-used trail of EBC, and the famous ‘Imja Tse’ [Island Peak] will give you box office views in the Himalayas that will set your heart fluttering like a butterfly…

Nevertheless, if acclimatization is something that gives you the jitters, or if flying small twin otter planes are frightening where it seems the massive mountains are coming straight at you & you feel like your plane is going to dive straight into the mountains; or you don’t dig chilly temperatures then Annapurna Base Camp might be the ideal option you’ve been looking for over the years for a vacation in the Himalayan sunshine…the ABC is a myriad of diverse ecosystems that warm the soul, the heights are comfortable on the body, with lovely carpets of rhododendron forests and fewer crowds, can be a tricky decision for you to make – the Everest & Annapurna region both mean one thing ‘Himalaya’, however, Annapurna is a completely different story of the Himalayas. The huge, snowcapped peaks chase you all the way and become a regular backdrop throughout your journey when hiking up to base camp. 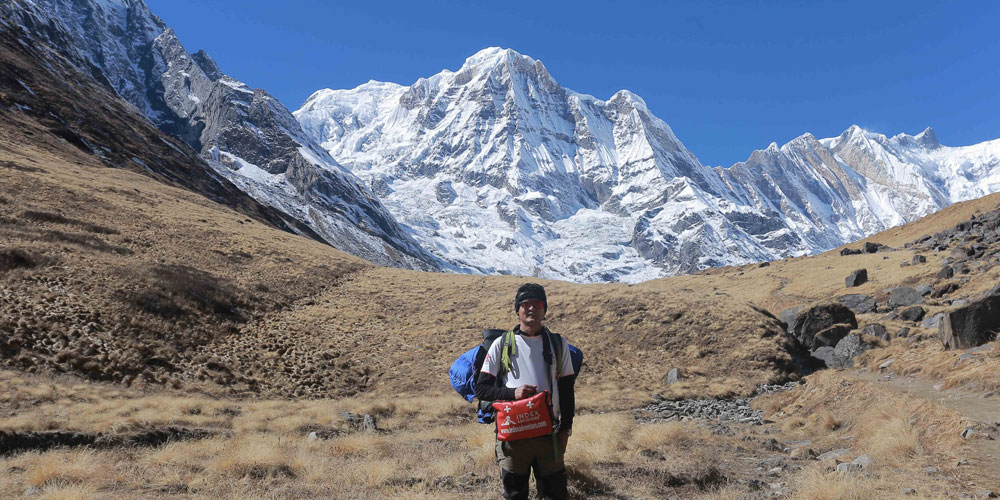 The Circuit which includes Annapurna B.C. begins in the lush lower mid-hills, meandering through terraced rice fields, oak forests, and rhododendrons in abundance (if you do your trip in April you will see these wildflowers in full bloom, a stimulating experience that’s virtually unforgettable). And since it’s the mountains you’ve come for, no disappointments in this area

the amazing peaks of Machapuchare and the 8000m giant Dhaulagiri keep your heart dancing with a happiness you’ve rarely known. Annapurna simply has so much diversity to go with its stunning views. Interlinked with the ABC is the Annapurna Sanctuary that opens up an amphitheater of glamorous & when you touch the Annapurna BC, you are virtually surrounded by peaks from all sides where the views warm your soul to a great extent. If you are cramped for time, ‘Poonhill’ is a fantastic option that you can do in 3-4 days flat & the Annapurna Circuit, considered one of the best treks in the world, is an ideal outing in the wild with flatter terrain that’s rich in lush greenery. Comparing the attitudes of both these base camps gives you a difference of roughly 4000 feet where the ABC is a lower elevation of 4,130m in comparison to EBC that goes as high as 5545m; hence, it is all there for you to make your choice on whose geography is king – the EBC or the ABC???

Communities you meet on the trails:

The Everest Base Camp

The valleys & glens around Everest are usually home to the Sherpa folks and tranquil Buddhist monasteries. There’s a strong sense of the spiritual as you pass through the vibrant villages of this area. Ancient bartering systems have existed here for centuries with Tibetan traders who still visit Namche Bazaar to this day; the word ‘Sherpa’ is a translation of ‘east people’ (the Sherpas migrated east from Tibet centuries ago). If you’ve planned your Everest trip for March or April, you’ll bump into seasoned veteran climbing teams’ cueing up for the summit in May.

The Annapurna Base Camp

The Annapurna BC/Circuit passes through typical country settlements where small families live in colorful villages by the side of valleys and life hereabouts has existed like it was a hundred years ago. You’ll meet Bahun/Chettri communities in the lower hills & the Gurung folks are usually found on the higher elevations hereabouts, especially in the village of Ghandruk. Familiar Buddhist chants that reign supreme in the Everest region is heard here too, but on a lower scale. The religious roots here are more Hinduism and Animism throughout the Annapurnas, which give the trails a pretty different vibe. Among the fauna of this zone, the cow is queen & is worshipped hereabouts in all the villages you walk into. Some hikers even swear they’ve seen vermilion splattered cows even smile hereabouts with all the love & care they get. If you love & prefer more local flavor in your trek, Annapurna Base Camp is the best choice you could have ever made…

Accommodations are pretty the same along both trails; however, one major difference is the bathrooms. Lodges in the Everest region are more or less shared indoor bathrooms, but on the Annapurna circuit you’re probably wading into pitch-black bathroom short hikes straight into the woods, however, you’ll surely find plenty of torches around.

Western toilets are the norm on the Everest Base Camp trek, while you might only come across a few on the Annapurna circuit. But good toilets are in the offing in this area…

You surely won’t find much of a difference between the meals you eat on either trek. Nevertheless, you’re more likely to get more organic veggies on the Annapurna trails wherever you go. And yes, the delicious apple pies, you just can’t take this delicacy away from this region; the apple pies you’d find here are far superior to the ones you’ll find in the tourist hub of Thamel…

It all depends on the season but in most cases, the EBC trek is generally much more crowded and large groups are common. The Annapurna Base Camp/circuit, however, features hikers in pairs or small groups and is not nearly as busy, but on some occasions, you’re likely to find the hordes in this region as much as you would in the Everest region…

Getting to these trailblazing Base Camps

If planes and runways aren’t your cups of tea, this factor alone might help you make your decision a lot easier. The only way to get there? A spectacular (albeit a little bit scary) flight to the tiny airstrip of Lukla. The mountain views are unbelievable … just don’t look down. But if you’re hell-bent on doing the EBC trip without the flight, then the only option is to do the old trail via Jiri that the legends used before the airport were built…

The gateway to the Annapurnas is the lovely little town of Pokhara, sweetly perched on the shores of the gorgeous Phewa Lake. It’s a laid-back place where you happily just spend a week chilling out with your favorite book, and you can reach it by bus or plane from Kathmandu. Getting to this region is a walk in the park… 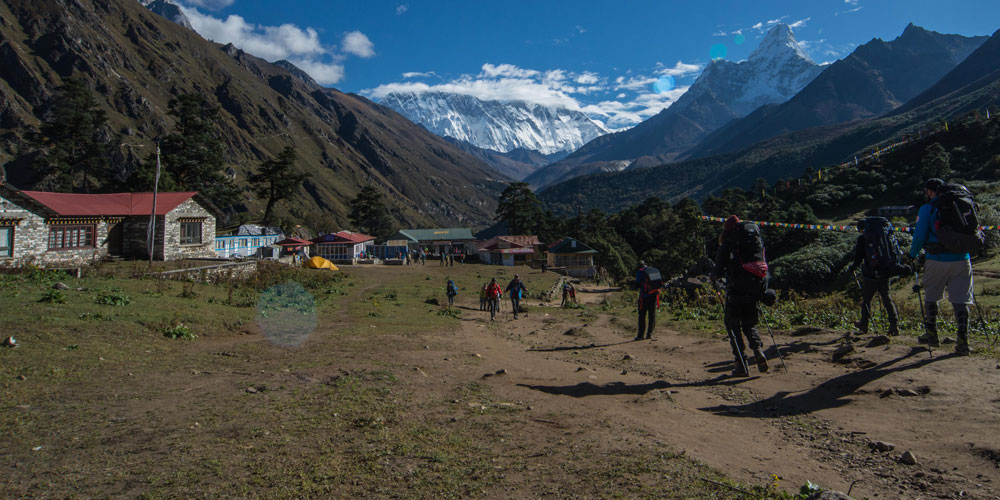 If you are a greenhorn trekker who loves the wild & eager to get friendly with the Himalayas of Nepal, at ‘Index Adventure’, we sincerely advise our clients to do the Annapurna Base Camp first to get a feel of the mountains & prepare you for the bigger things to come…once your body gets used to the thin air in the Annapurnas, you can make a beeline for the Everest Base Camp; in this way its an easy feel on the body because you know exactly what to do when you hit the high altitudes & acclimatize better. Doing the ABC in the spring is a lovely time to enjoy the mountains in this region with the pretty flowers everywhere & the weather is so heavenly pleasant. In the autumn you can make a break for the EBC; & in this way you will soon realize that life is nothing without an adventure in the Himalayas of Nepal…just pack your hiking boots into your haversack & jet into Nepal, we’ll make you feel at home like you’ve never known before.