The Battle between the Circuits…

This much less known region of Nepal offers you fantastic treks through the epicentre of Nepal's 2015 earthquake, and should you trek in this exceptionally beautiful region, your visit to this area will be helping the local communities who’ve been left out in the cold far too long post the 2015 seismic disasters, despite a National Reconstruction Authority [NRA] set up by the government of Nepal with the support of the international community raising $4.1bn (£3.2bn) for Nepal’s reconstruction, but much of the homeless in this region have yet to receive any of the promised cash. Your trek through these villages now wrecked by huge boulders the size of beetle bug cars has been ringed in by bamboo fences. Tarpaulins received through aid cover-up as ramshackle shops or are patched into huge gaping holes on rooftops while Mules tread on out new trails through avalanche sites as the locals fight against the harsh elements of this stunning region year in, year out

Since this all boils down to ‘trekking’, there are basically to trailblazing treks that reign supreme in this region, namely: the ‘Manaslu Circuit’ Trek, an eastern neighbor of the famous ‘Annapurna Circuit’; and next you have is the ‘Tsum Valley’, a venerated Himalayan pilgrimage valley which physically sits in northern Gorkha within the Manaslu region, against the eye-catching background of the Ganesh Himal, Sringi Himal and Boudha ranges. Much of a secret to the outside world, this tranquil Himalayan valley is a wealth of ancient art, culture, and religion. Many religious and archaeological relics still remain intact and unknown without being discovered in many places. The options could be this limited in this region unless you want to scale the mighty Manaslu Peak at 8163 meters [the 8th highest peak on earth], and this might be a call too tall even for seasoned trekkers who wouldn’t want to go this far.

Running parallel to the comparisons between the Everest Base Camp & the Annapurna Base Camp, the two circuits of Annapurna & Manaslu are also in a battle of their own that may well depend on trekkers who ought not to grumble about the new roads that have come up within the Annapurna Circuit but rather be more open-minded about what choices they make for trekking in Nepal and learn more to look outside the familiar trekking hotspots to numerous other off-the-beaten-route locations this amazing country provides. And in doing so, this will surely help to spread the benefits of adventure tourism to some of the poorer remote sections of Nepal’s famous Himalayas. Its been since many years that the Annapurna Circuit is well known to be one of the world’s epic ventures with its unique change in altitudes making it one of the world’s most varied treks ever known. The abundance of tea houses in every village on the trails, affordable food and accommodation is found throughout the journey, all combine to make this circuit ideal with very little management needed. But with all this combined including the delicious apple pies also in the mix, the Annapurna Circuit is no longer the king of the wilderness it once was…with tarmac roads almost covering the circuit entirely. 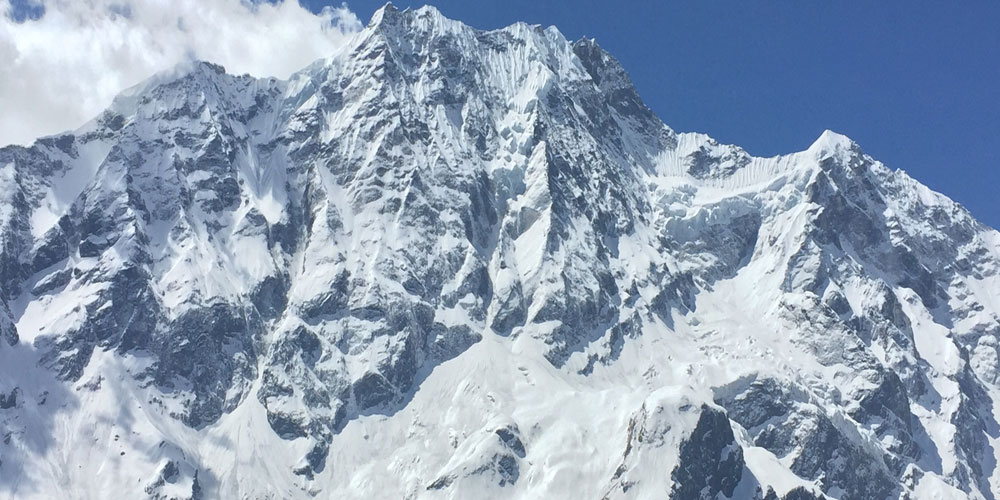 However, if any visitor has been to the Manaslu region, trekkers will note the dissimilarities are not so much that separate these two circuits. Clinging to the Marsyangdi gorge of the initial part of the Annapurna Circuit, visitors will straightaway realize the Manaslu Circuit’s Budhi Gandaki gorge is a lot narrower in the striking river valley, at times closing into just a few meters apart as steep wooded ridges rise up on either side. Many areas of the trail are naturally cut into cliff faces and climb high above the valley floor on natural jagged rock staircases to climb the heights. There’s much in the similarity between the circuits. Trekking in the Manaslu region also start at a low altitude of 600m in Arughat and rises through various climate zones to a high pass, the Larkye La at 5160m, before the trail slides down again as it traverses one of Nepal’s group of 8000m peaks. The Manaslu Circuit even goes down a route of the Annapurna Circuit when it touches the village of Dharapani and goes by the banks of the Marsyangdi River by backtracking for the last few days. Its so much like the Annapurna Circuit where it begins in the Hindu mid-hills and goes through stupas, gompas and prayer walls into Buddhist country at higher elevations while crossing the great Himalayan divide. 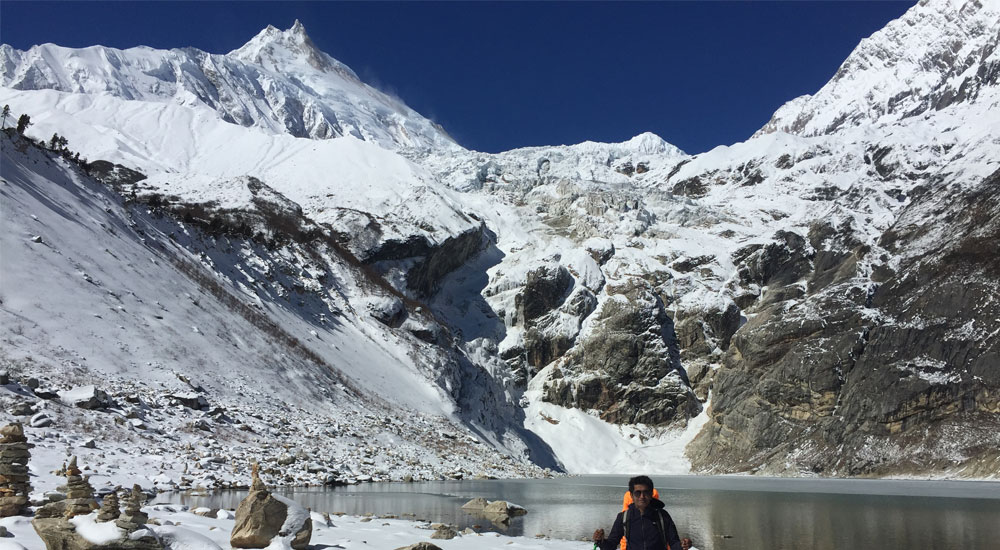 The Manaslu region opened its gates to tourists in the 1990s, but the region was temporarily closed after the disastrous earthquakes hit Nepal in April 2015, killing more than 9,000 people and saw thousands without homes. This region took the brunt of the quakes.

The Manaslu Circuit is nowhere close to development like the Annapurna Circuit if you are to compare accommodations as yet. The Manaslu trails became a “tea-house” trek as early as 2015. Tourists had no other alternative other than camping, but now a few lodges have been built by villagers. There may be some doubts about the hygiene in some places but trekkers to this region are advised in advance so there are no hiccups. Some groups would probably choose a fully organized camping trek and hike in with their own kitchen crew, but a sea change can now be observed in this stunning circuit. 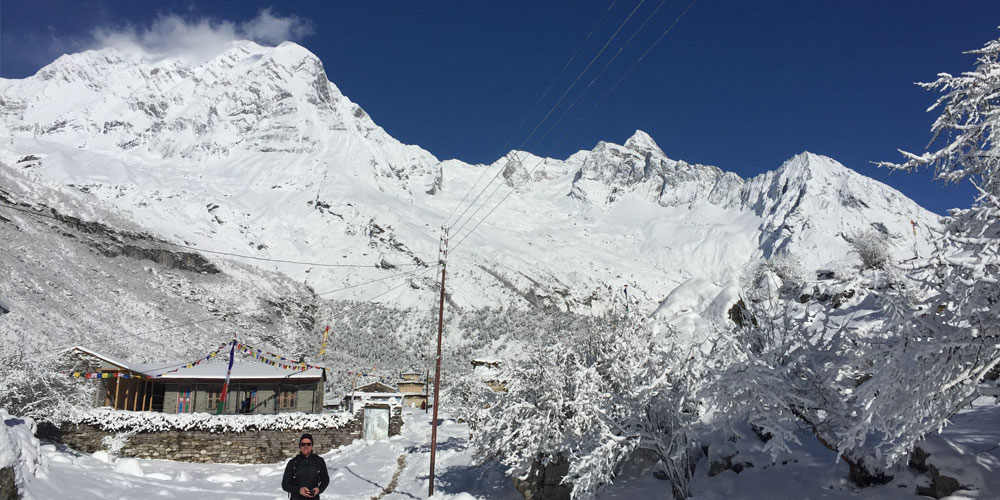 Over the decade went by, the Everest Base Camp trek has now become overcrowded and touched saturation point, while tarmac roads now ring in a bigger section of the worn-out Annapurna circuit. Opting for Manaslu is true wilderness to the core, and definitely a lesser used option. Perhaps, more than all this, you’ll be doing a venture in the knowledge that your visit will be, sadly, a lifeline towards the shattered region’s recovery.

Do this trek with ‘Index Adventure’ they have a team born into this region and will take you places most others would just lazily pass by. Despite all the gossip you will hear on world tourism circuits, Index Adventure will show you a unique aspect of this region; where despite the seismic battering, in this area you will simply admire the formidable characteristics of the locals, their spirit & will to survive, in the face of all the disasters that have hit them so hard.

What will touch you most are the jazzy signs advertising hot showers, wireless internet, bakeries and mountaineering equipment, but what really touches the soul is an orange poster of a Hotel with terrific 360-degree views & a lovely Top O’ the Town restaurant, that reads:  “not recommended by Lonely Planet guidebook”.