Upper Mustang also known as Lo lies towards the north of the Annapurna and Dhaulagiri ranges. Tibetan plateau surrounds upper Mustang on the eastern, western, and northern sides. Upper Mustang keeps intact with Nepal on the south side only.

The people in upper Mustang practice the ancient religions. Trekking in Upper Mustang during Tiji festival is a golden chance to experience the local Tibetan culture.

The Tiji Festival Trek takes you to the city of Lo Manthang for 3 days celebration. During this festival, you’ll see the masked dancers acting like demons. They perform several forms of dances slashing at the air with their swords. During the festival, you can see the colorful traditional costumes, dances, and music.

If you want to book this trip, do not hesitage to Contact Us. 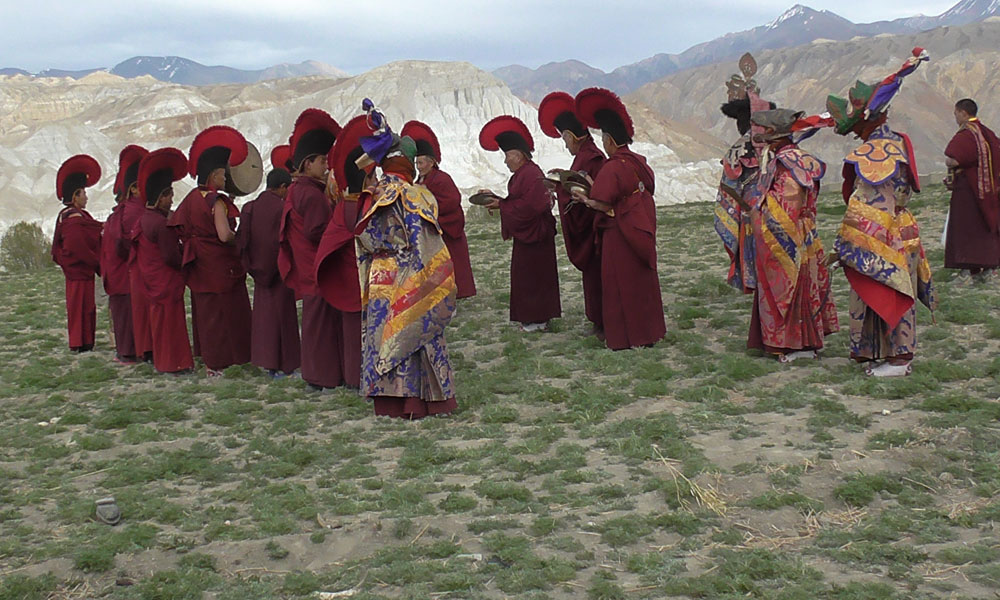 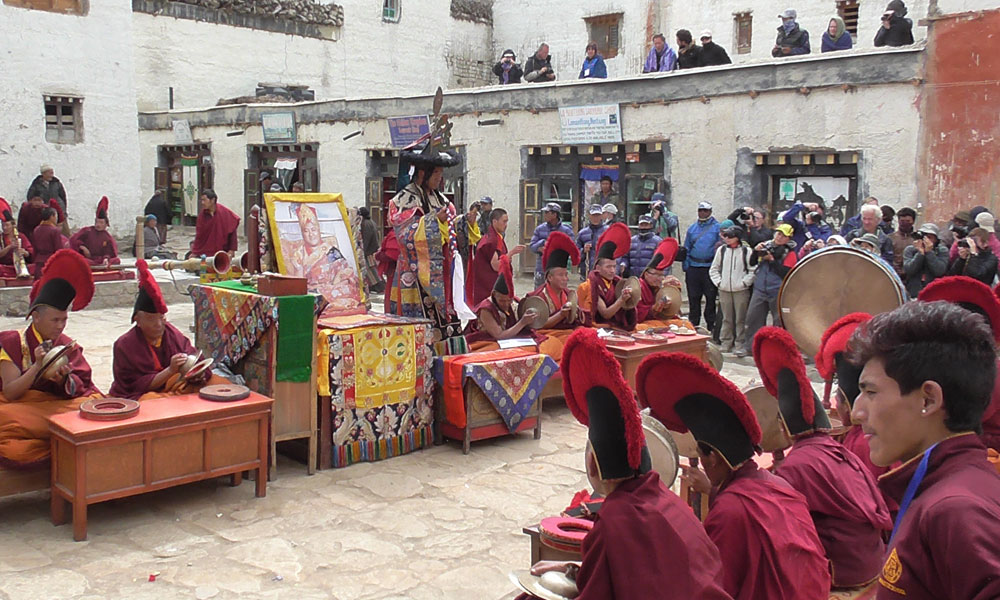 Tiji is a revered festival in Mustang. The celebrations of Tiji is vibrant. Locals of Lo Manthang wear their traditional costumes and perform unique dances in front of King’s palace during Tiji festival.

During the Tiji festival, the inhabitants in Lo Manthang celebrate the victory of good over evil. The Tiji festival corresponds to a myth. According to the myth, Dorje Jono, a deity must save the kingdom of Lo from destructing by battling against his demon father. People believe that the deity took rebirth to defeat the evil forces that created sufferings on earth.

The term Tiji comes from the words “ten che” which means the “hope of the dharma prevailing in all worlds”. This is a message that Guru Rinpoche spreaded via Buddhism. Tiji is a spring renewal festival. The people in Lo believe that the festival strengthens the hope, strength, and prosperity in their kingdom.

People believe that the celebration of the Tiji festival began in the 15th century. During the three-day masked dance, the beating of drums and Buddhist chants fills the air. Also, during the festival, they display an ancient Thangka painting of Guru Rimpoche Padmasambhava. 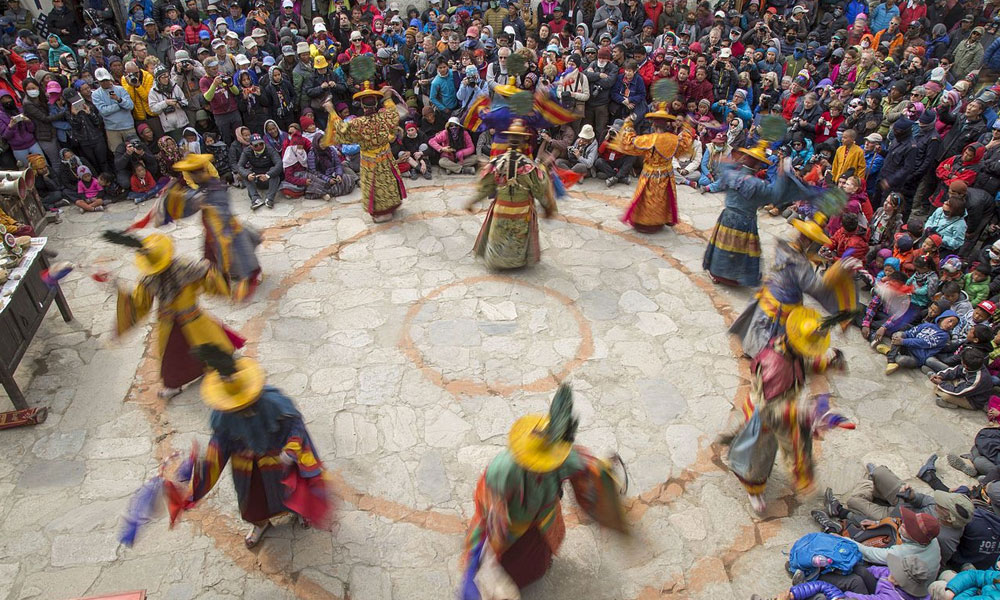 When it’s afternoon, the Lamas play horns and two twelve feet cooper dunchens. The double reeled horns, drums, and cymbals are also played along. The music is unique. The entire region becomes loud and musical.

Afterward, a three storey high, enormous ancient thangka of Guru Rimpoche Padmasambhava gets unrolled down the south wall of the square.

Late afternoons are windy and dusty. Eleven lamas wearing traditional maroon and gold costume with high red hats arrive at the square. They take their respective seats along the wall where the Thangka hangs. Tashi Tenzing sits on the elevated seat in the center.

Now, the masked dancers start performing the mythical act via dancing. Dorje Jono and his powerful sword dance when he fights the demon is magical. Towards the end of the dance, Dorje Jono destroys the demon.

After Dorje Jono kills the demon, people believe that their misfortune ends bringing peace, harmony, prosperity in their kingdom. Also, they believe that water becomes plentiful at Lo Manthang again as the demon dies.

If you want to book this trip, do not hesitage to Contact Us. 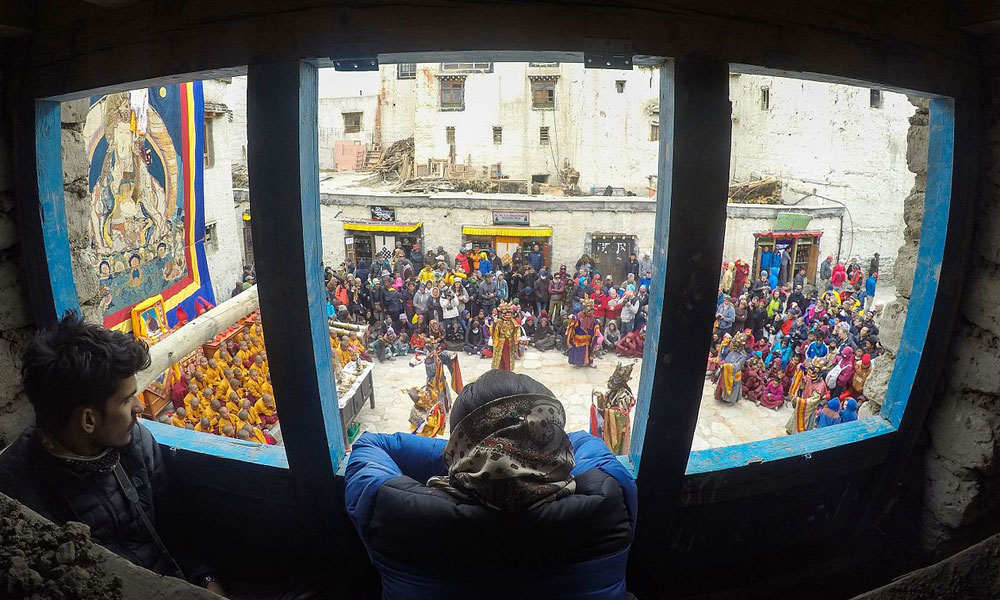 On the second day of Tiji, the Tibetan women wearing their traditional clothes and colorful jewelry coming to the square from the nearby villages. The square fills with cheerful monks, women, and children wearing their colorful dresses.

The dancers wear elaborated costumes. The King of Mustang “wears a whole crown of tiny river pearls set off by dozens of large red coralline tones. He wears beautiful pieces of antique pieces of jewellery and matched ornaments of turquoise.

People wear beautiful costumes and masks. They look cheerful and happy. The twelve-foot horns, the gold cups of wheat, the butter cakes are attractive. The wind, sun, and the beautiful surrounding views make a beautiful combo.

This is the last day of the celebration of the Tiji festival. The festival ends with a grand celebration. On this day, they destruct the remainings of the evil. The ceremonial destruction is unique. They represent the destruction with some long black yak hair and red torma cakes minced to a dark red furry.

The demons red remnants are set out on an old tiger skin. People attack the skin with bow and arrows, slings, and old guns. The heavy gunfire from the old muzzle-loaders overturns the remains of the demons upon the ground. The Tiji festival ends with the demise of the demon. 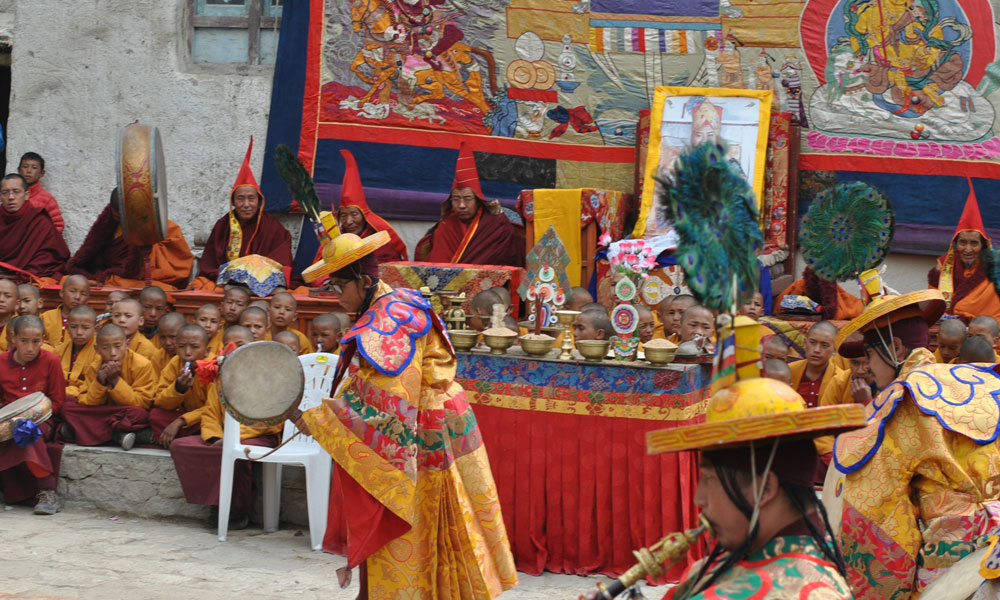 As the Tiji festival approaches near, people from neighboring villages travel along the trails to Lo Manthang. The trail becomes busier with lots of people and caravans of mules. Lots of tourists drive to Lo Manthang via jeeps to see the celebrations of Tiji festival.

The Mustang Tiji festival is a beautiful trip. This trek incorporates natural, geographical, and biological diversities. On the top are the unique celebrations of Tiji festival.

The Upper Mustang Tiji festival trek is a spectacular walk. This trek takes you through Himalayan terrain, lush fertile hills, and pristine valleys.

The booking for Upper Mustang Tiji Festival Trek 2019 is already open. Grab this beautiful opportunity trekking with a renowned trekking agency in Nepal, Index Adventure. We assure you the best memories for a lifetime. For further details or any queries, Contact Us.