Festooned in snow and ice, Mt Everest still stands tall at 8,848 metres, Mt Lhotse at 8,516 metres and Mt Cho Oyu at 8,201 metres – all in close proximity. The others – Ama Dublem, Nuptsé, Pumori as well as the Island Peak, Lobuché Peak, Mera Peak, along with numerous others – still stand their grounds in the Everest massif. The Gokyo Lakes and the Imza Valley lake still are as stunning as ever, the Khumbu Glacier as calm as ever and the icefalls and the ice seracs as teasing as ever. Carrying the fresh waters from the Glaciers of the massif, the Dudh Koshi River still flows as freely as ever. Still welcoming all with the same warmth, the villages at those altitudes and the terraced farms on those rolling hills, the lush green forests and the barren lands as well as the valleys and the plateaus, all remain as prepared as ever in the Sagarmatha National Park.

“Home equally to the wild as well as the tamed” 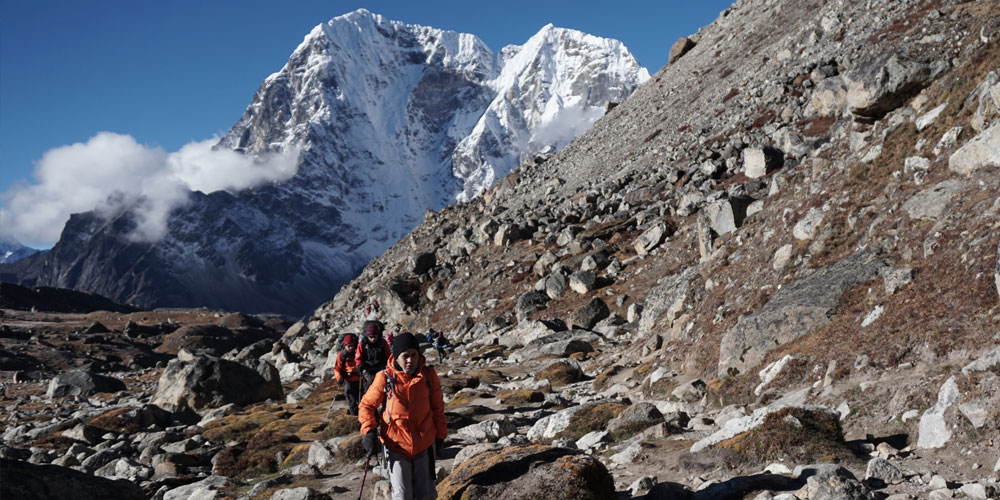 Along with the others, the Sagarmatha National Park awakes early morning as soon as the first rays of the sun hit the terrain. Inside the sanctuary, the rhododendrons, the bamboos, the blue pines, the first and the junipers shrug off the dew while the mosses and the lichens cling on as far as possible until the tree line. The Red Panda, the Himalayan Black Bear, the Himalayan musk deer and the Himalayan Thar stretch their bodies and look forward to the unfolding of the phenomena on this day-light in their lives. With perhaps the same motive, the vultures and the eagles spread their wings; the empeyan pheasants and the snow pigeons sharpen their beaks; the butterflies flutter, and the crickets sing while the elusive snow leopard sets a foot forward.

Along with the wildlife, the settlements, Lukla, Phakding, Namché, Thamé, Khumjung, Pangboché, Dingboché, Lobuché, Pheriché, Kundé, Tengboché, and Chhukkhung, are all up and running: the children, some making toys of anything they can find their hands on and others in their school dresses perhaps on their way to school; the young, some with loads on their or their yak’s backs heading towards their destinations and others assisting the family with the daily work in the farm or the kitchen or the hotels or the shops (business as usual); and the old, preaching words of wisdom or simply gossiping over their favourite tea under the sun. In the Tenboché Monastery, visitors, as well as believers, enter joining their hands for a prayer of faith while the Lamas chant mantras.

On the way, the chortens and cairns remind of the dead; the mani walls and the prayer boulders stimulate some thoughts into the beliefs of the locals as the prayer flags flutter together in yellow, green, red, white and blue. 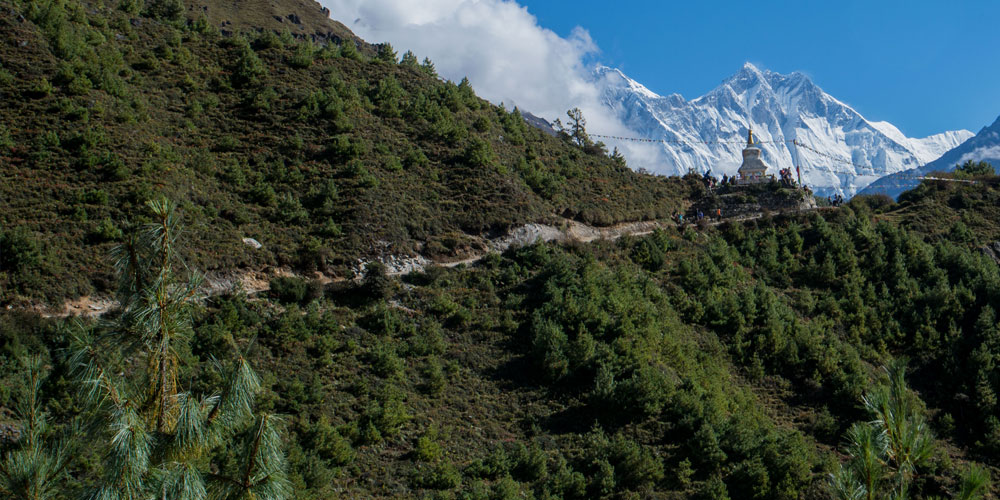 Trekking in the Everest Region

Whether the trailhead is Lukla or Jiri or Phaplu, the region is a popular destination for trekkers from around the world. Thousands of people seeking an escapade amongst the Himalayas from a vantage point of above 5,000 meters choose the Everest Base Camp Trek or the Gokyo-Ri Trek or the Three-Passes Trek. Possibilities do not stop here, however. As a detour or a complete trip, Everest Panorama View Trek, a trek to the Khumjung Village and the Namche Bazaar, is certainly on the cards for those with tailored needs.

For the climbers, solo or in the expedition, numerous elevations over 6,000 m and a number of others above 7,000 m, some scaled before and others yet to be, await their arrival on a Peak Climbing mission or a Summiting Expedition (one of the giants) whenever the choice be. Peak Climbing in the region is a popular choice and there are many peaks designated as ‘trekking peaks’ by Nepal Mountaineering Association. These peaks fall between 5,000 and 7,000 meters. As these are classified as ‘trekking peaks’, they are considered non-technical from a mountaineering perspective although some of them will require some climbing training. Popular choices in the Everest Region include Mera Peak (6,476 meters), Island Peak (6,189 meters), and Lobuché (East) Peak (6,119 meters).

Summiting many of the higher Himalayas is certainly also possible.

Visiting the Everest Region, other options

Besides walking, visiting the Everest Region is also possible for that up close mountain viewing through other means. There are two possibilities: an Everest mountain flight or a helicopter tour to Everest. The mountain flight often lasts for an hour in the morning and presents an aerial view of the Himalayas, glaciers and the lakes. The adventure offers a window seat as the pilot narrates. The Everest Helicopter Tour last for a bit longer since they stop near the Everest Base Camp and the Everest View Hotel.

People, culture, and festivals in the Everest Region 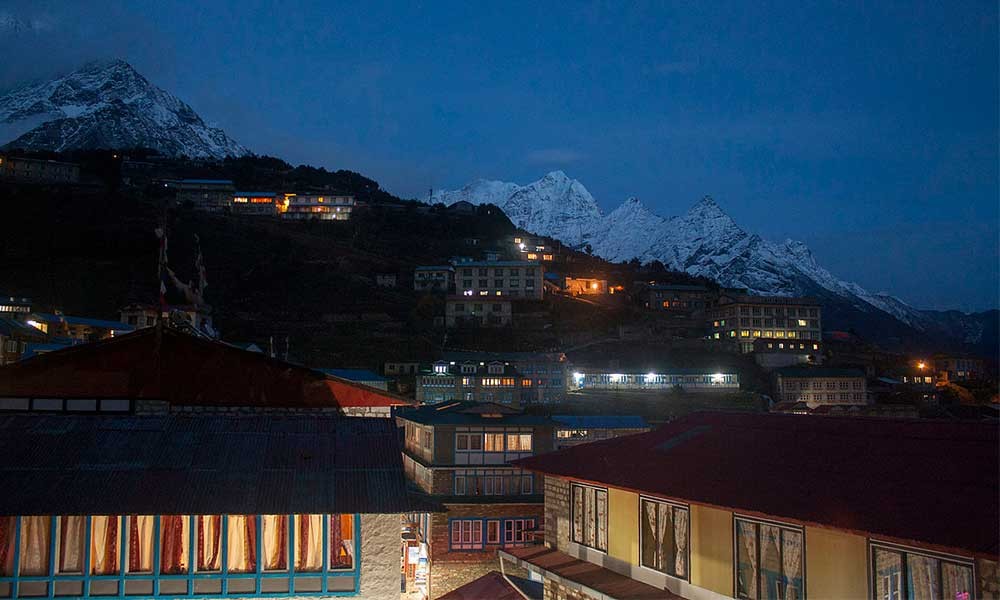 The Everest Region is home to most of the Sherpa, a Tibetan ethnic group. The everyday activities of the Sherpa are heavily influenced by their faith. They practice the ancient school of Buddhism, Nyingmapa, founded by Guru Rinpoché in the eighth century. Thus, the Sherpa believe in mysticism and, thereby, hidden valleys and treasures. Mountains, caves, and forests are revered as each one of them is home to a deity or demon. In their attempts to respect as well as appease such divine powers, monasteries, chortens, Cairns, prayer flags, prayer boulders, prayer rock faces and mane walls are common sights in Sherpa villages and their surroundings.

Although many, these days, also wear imported fashion, traditional Sherpa attire is still a preferred choice. While women still find their men charming in Kitycow, Chhuba (over raatuk, a kind of blouse), and a kanam for a trouser, with a matching tetung, the outer jacket, men find the other sex beautiful in the long-sleeved woolen tongkok or the sleeveless angi with colourful aprons – metil in the front and gewe at the back.

Along with the everyday rituals and businesses, the life of the Sherpa in the Everest Region also enjoys a number of festivals: Mani Rimdu, the one with the Mask Dance in Tenboché Monastery, in October; Lhosar, the New Year, in February; Dumji, the celebration of the birth of Guru Rinpoché, in May or June; and Everest Marathon, a run to honour the first successful Everest ascent by Tenzing Norgay and Sir Edmund Hillary, around the end of May.

Monasteries in the Everest Region

What often triggers a visit to a monastery? For the locals, it’s certainly their faith. How about those who come from far and away? Myriads of people; multitudes of reasons, perhaps. Therefore, leaving all, rightfully, to reach a conclusion of their own, the monasteries in the Everest Region welcome everyone, irrespective of the colors, sizes, and faiths. The following is a list of some.

Flora and fauna in the Everest Region

Besides trekking and climbing, the Everest Region has some more to offer. For those interested in the flora and fauna of the land, a visit with keener investigating intentions can certainly pay off. While a need or simply a desire to understand the plants of Everest can make many opt for closed meetings with the bamboos, the rhododendrons, the blue pines, the first and the junipers as well as the mosses and the lichens, the focus of others could be the birds of Everest or the animals in Everest.

Along with the Himalayan monal (impeyan pheasants), the birds of Everest is a mix of many including the golden eagles, snow pegions, yellow-billed choughs and the snowcocks.

Accommodation and Food in the Everest Region

Unlike yesteryears, accommodation in the Everest Region for trekking trips or climbing expeditions can be assessed as sufficiently equipped. In affluent settlements such as the Namché Bazaar, there are several options, as good as in any town or city in Nepal. Even higher up, the teahouses of the past have now been replaced by their relatively modern mix. In most places in the Everest Region, they come with the choices of single rooms, double rooms as well as dormitories, often with one large dining area. The bathrooms too are okay given the circumstances.

The restaurants in major settlements offer all kinds of cuisine from continental to Chinese, as well as Dal-Bhat, the major Nepali staple. The teahouses also have a decent menu given that everything to the Everest Region after Lukla comes on the backs of people and yaks. Most of them offer toasts, eggs, potatoes with tea or coffee for breakfast. Often, the toasts can be replaced with chaptis or Tibetan bread. Other choices include the porridge and pancakes. Jam, honey, and butter are usually at one’s disposal. For lunch and dinner, the Sherpa Stew, served throughout, is an option and vegetable noodles also serve the purpose. Dal-Bhat, of course, can always be trusted for the nutrition required.

The food at these altitudes comes for a price. Even hot water costs money. Carrying some Yak cheese and energy bars can be a good decision to add energy to the diet when required.

Purified water is safe to drink anywhere in Nepal. This may require using a purification tablet to collected waters or buying the ones available in bottles. Tap water is not safe to drink.

Entering this land of the Everest requires two permits: the Sagarmatha National Park Entry Permit and the Trekkers’ Information Management System (TIMS) Card. An additional permit, Gaurishanker Conservation Area Entry Permit, is required if the trailhead is Jiri. Climbing any of the peaks requires a further special permit.